ZDMP is a wide platform which integrates several technologies to achieve the zero defects in the manufacturing industry. Technically speaking, the foundations of the platform are based in the next principles: 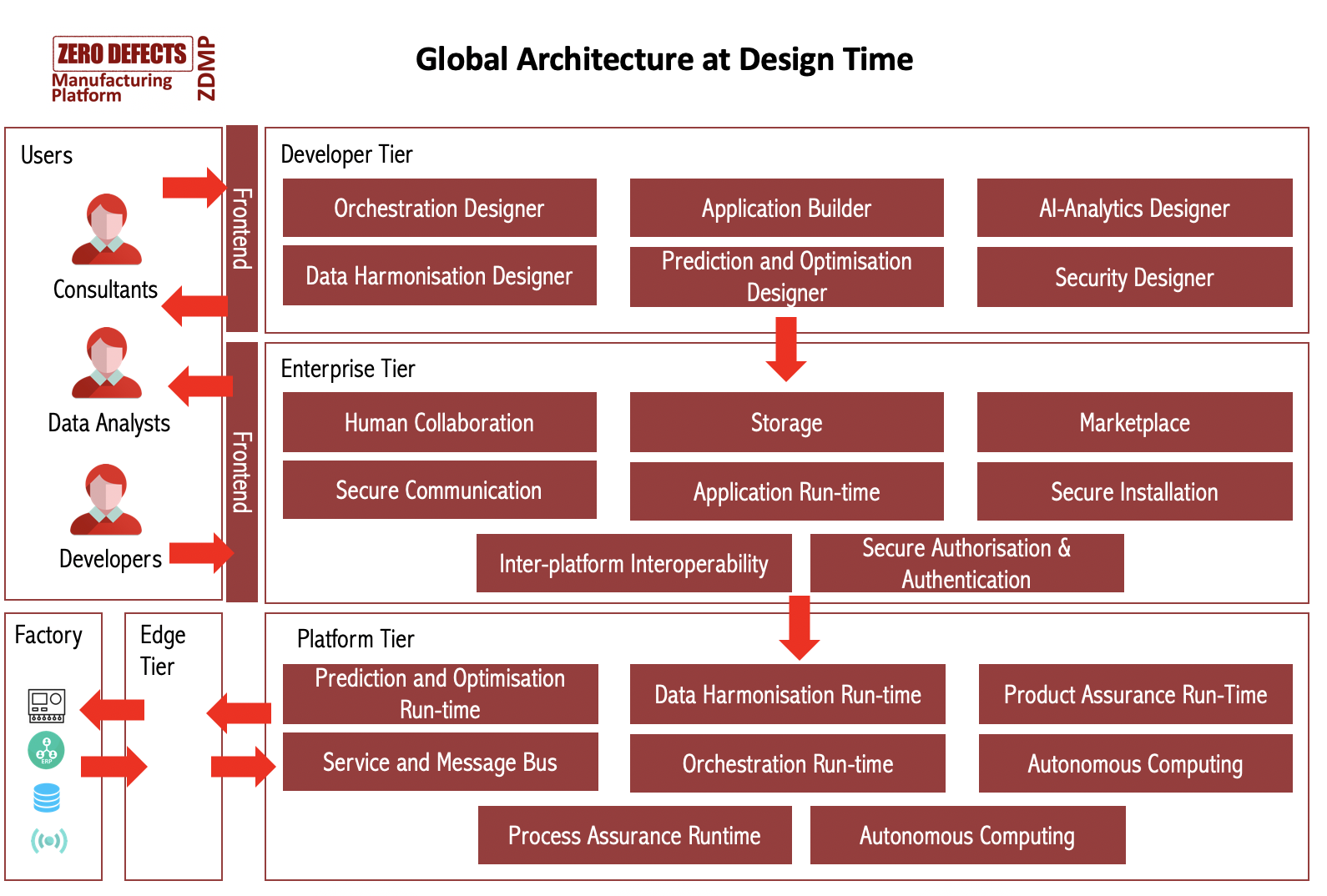 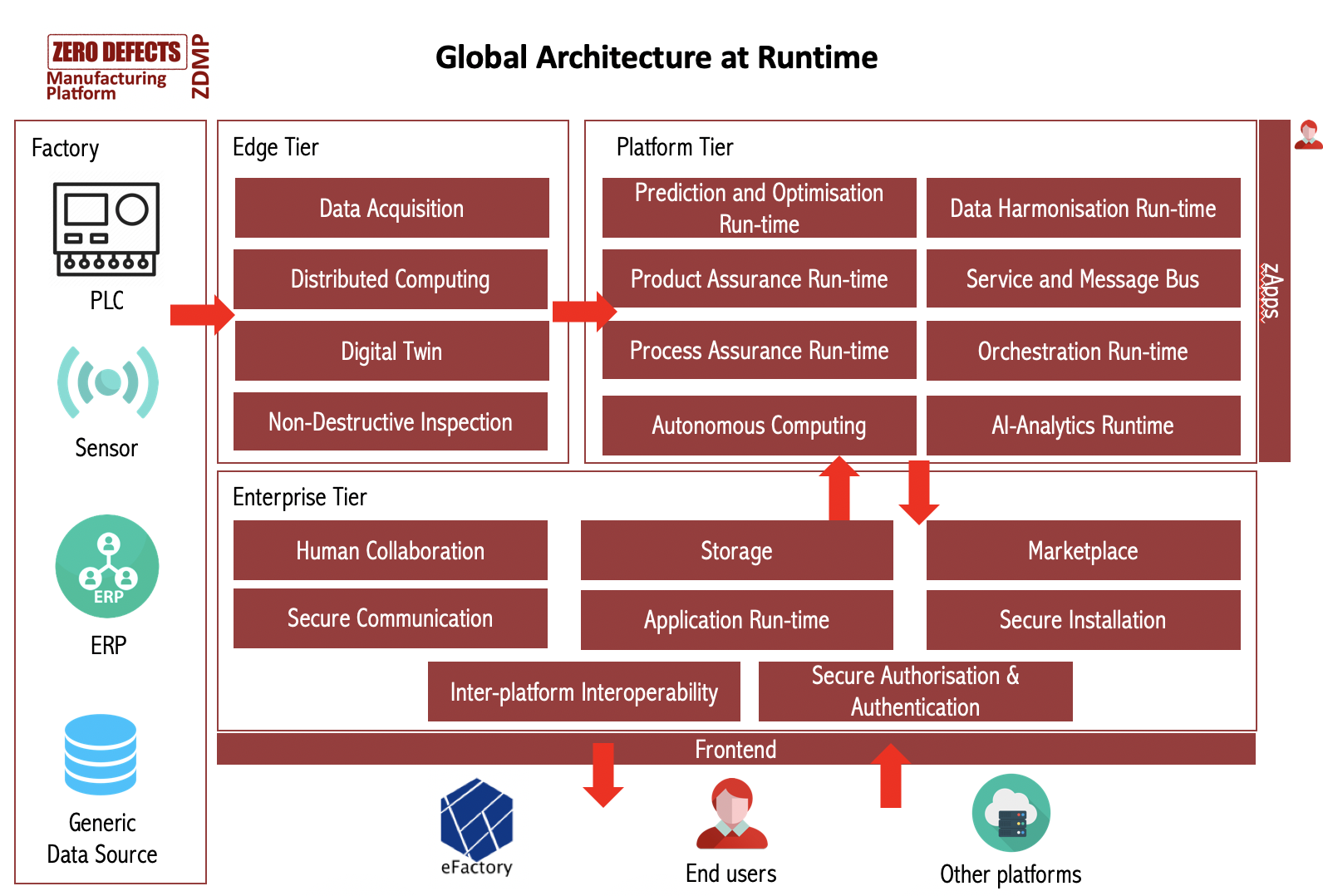 ZDMP is a complex platform, which needs to integrate several components to work properly. On the one hand, the integration is of paramount importance at the initial phases of the development. To ensure, or at least to ease, that integration every component must follow a set of guidelines to fit in the overall ZDMP platform.

So to accomplish that, ZDMP allows several ways to work with, but all of that ways have some commons activities and way of producing software that are described in the following subsections.

Every component repository must have the following mandatory structure:

Every component has his own architecture, and every architecture is composed of several subsystems. Next figure shows an example of a specific architecture defined for a ZDMP component:

As shown in the example, component is formed by a set of subsystems. Those subsystems can be transformed in APIs, databases, frameworks, engines, etc. It is not important, from an integration perspective point of view, the technology used in the component. Developers are free to use the technology they think better accomplish their targets; so in this case the only requirement is that it must run in a docker container.

At the end, there is the need to orchestrate all those subsystems, connect them in some way, and run them easily, and it has to be done without the need of knowing specific technologies and implementations. Furthermore, all the things that are not code and the the subsystems to build a component will be configured using docker-compose. Of course, there may be exceptions. In fact, some of the components cannot be dockerized, because they may be e.g. desktop or mobile applications, As long as they are client applications that consume ZDMP services this is not an issue.

Every team of developers can build their own component orchestration in several ways, called flavor in the ZDMP terminology, it can be monorepository, multirepository, proprietary or mixed, and this is explained in the following subsections.

One approach is to use a monorepository flavor. Here the developers put all the code of each subsystem in a folder. The standard folder name is called ‘subsystems’ in ZDMP, but this is only to ease the CI/CD tasks. 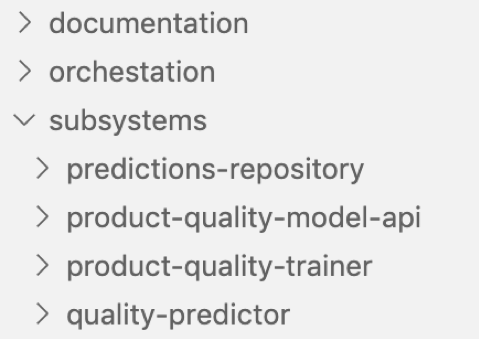 This approach has several benefits: * Easy to set up a CI/CD pipeline. It is only needed to configure it in one place * docker-compose.yml configuration directly over the code, avoiding the need to use another system (package managers, docker registries, external servers, etc.) * All the team can have a look at the code, and know how works the subsystem * Unified management: issues, milestones, and code are placed in the same repository

Of course, not all the deployments can fit in this flavor. Proprietary software code may not be uploaded, or simply the technical team may feel uncomfortable with this structure.

Another approach is to use a set of repositories. In this case, and taking the example explained in the monorepository section Figure 8, it may be composed of:

In summary, the multirepository flavor approach should:

In some cases, the component is composed of a set of subsystems, some of them proprietary that does not allow the source code to be stored in the ZDMP repository. This is the case were it is used the multirepository flavor.

Even for proprietary code, the component must be able to startup and be used in the ZDMP architecture. So, even in this situation, the developers are responsible to provide a properly built docker-compose.yml file.

Finally, all previous flavors can be mixed for a component if needed. It can be easily seen in the following example.

As we described above, the developers must fulfill the commons structure, which basically consists of:

Focusing on the monorepository flavor, represented by the frontend subsystem, a folder named subsystems should be created, and put the code of the frontend inside as depicted in the following figure. 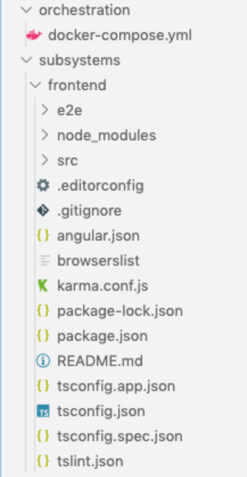 It is important to remember that, from the orchestration perspective, the technology does not really matter. The key here is to define the integration of that subsystem in the overall architecture, using Docker and Docker Compose.

How looks the repository, or what’s its structure, it’s irrelevant for the orchestration purpose. The only important thing is that the backend subsystem needs to generate a Docker image and upload it to an accessible Docker Registry, for example Docker Hub.

The developers can orchestrate the new backend in the docker compose file once the docker image is uploaded to a container registry. Next image shows an example of integration between frontend (monorepository) and backend (multirepository)

Actually, the multirepository flavor and the proprietary code flavor are basically the same.

In this section the orchestration between components are tackled. The ZDMP platform can be delivered in several ways: * As a SaaS in the cloud * On Premise

The orchestration will vary, depending on the overlaying technologies of the systems in which ZDMP will be deployed. That means that the global integration of components is flexible. In any case, the architectural reference implementation relies on UNIX servers, and needs a Kubernetes cluster, in which the ZDMP components will be deployed using Helm charts, which is the standard packaging model for Kubernetes applications.

The foundations of Kubernetes are not far from the Docker Compose we defined in the previous section. Of course, the syntax varies, but the underlying concepts are the same. At this stage, the components are still in development, and for that reason we don’t have any example of integration using Kubernetes. Nevertheless, the components can integrate one each other using Docker Compose, and that is the approach followed in the project.

In the next stage of the project, once the components are more mature, the focus will be in the integration tasks. For the moment, some work has been carried out to the infrastructure needed to deploy the reference implementation of ZDMP.