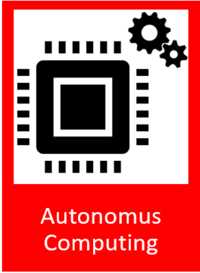 The Autonomous Computing component enables the decentralisation and automation of decisions by autonomously controlling processes values and resources, be it zApps, ZDMP components or computational resources, as well as communicating and cooperating with other components.

To execute actions autonomously, users can define limits for data points, as well as qualifiers (eg energy consumption is ‘larger than’ & ‘100 kWh’) to trigger user defined actions. The actions to be used are obtained from the Orchestration component, where the user can model BPMN Processes.

The following images are illustrative screenshots of the component 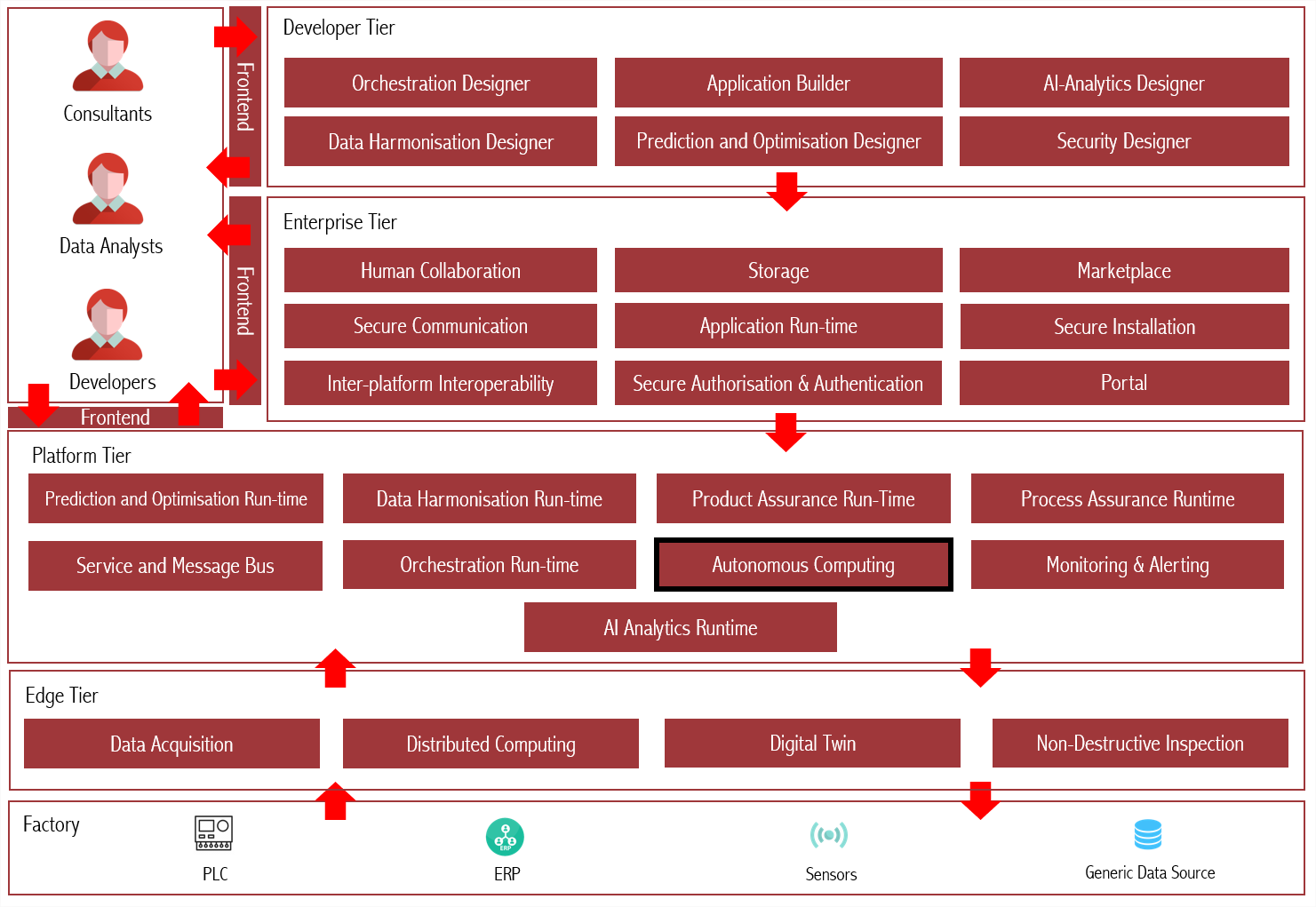 Allows the creation of Autonomous Processes consisting of rules based on KPI values, and API calls that are executed whenever the condition specified is matched. This gives the user the possibility to automate the execution of Processes when the production indicators are not conforming with quality standards, minimizing the reaction time for critical situations.

Allows the user to see the Autonomous Processes data and its execution through time. This information is used by the AI-Analytics component to offer the user insights on how to improve the conditions applied. The KPI’s values associated to an Autonomous Process can also be visualised in a timeline to improve the visibility of the impacts of the autonomous processes’ execution in the KPI’s values.

Monitors the KPI values changes to trigger the execution of a process. The component monitors the value change of every KPI associated to the Active Autonomous Processes, whenever the KPI values changes, an algorithm is applied to the conditions related to it, when the conditions are matched for one or more Autonomous Processes, the list of API calls defined are executed.

The Autonomous Computing has the following requirements:

The Autonomous Computing component can be installed via docker-compose, thus it is a server for the email credentials is needed:

As an example, create a file named ‘.env’ in the same folder of the docker-compose file, with the following information:

The Autonomous Computing component can be used through an API or a friendly user interface:

Each API call consist of:

The following example is based on the pencil productions where we have KPIs to monitor the quantity of pencil produced, considering the process to schedule the distribution of the batch of pencils: 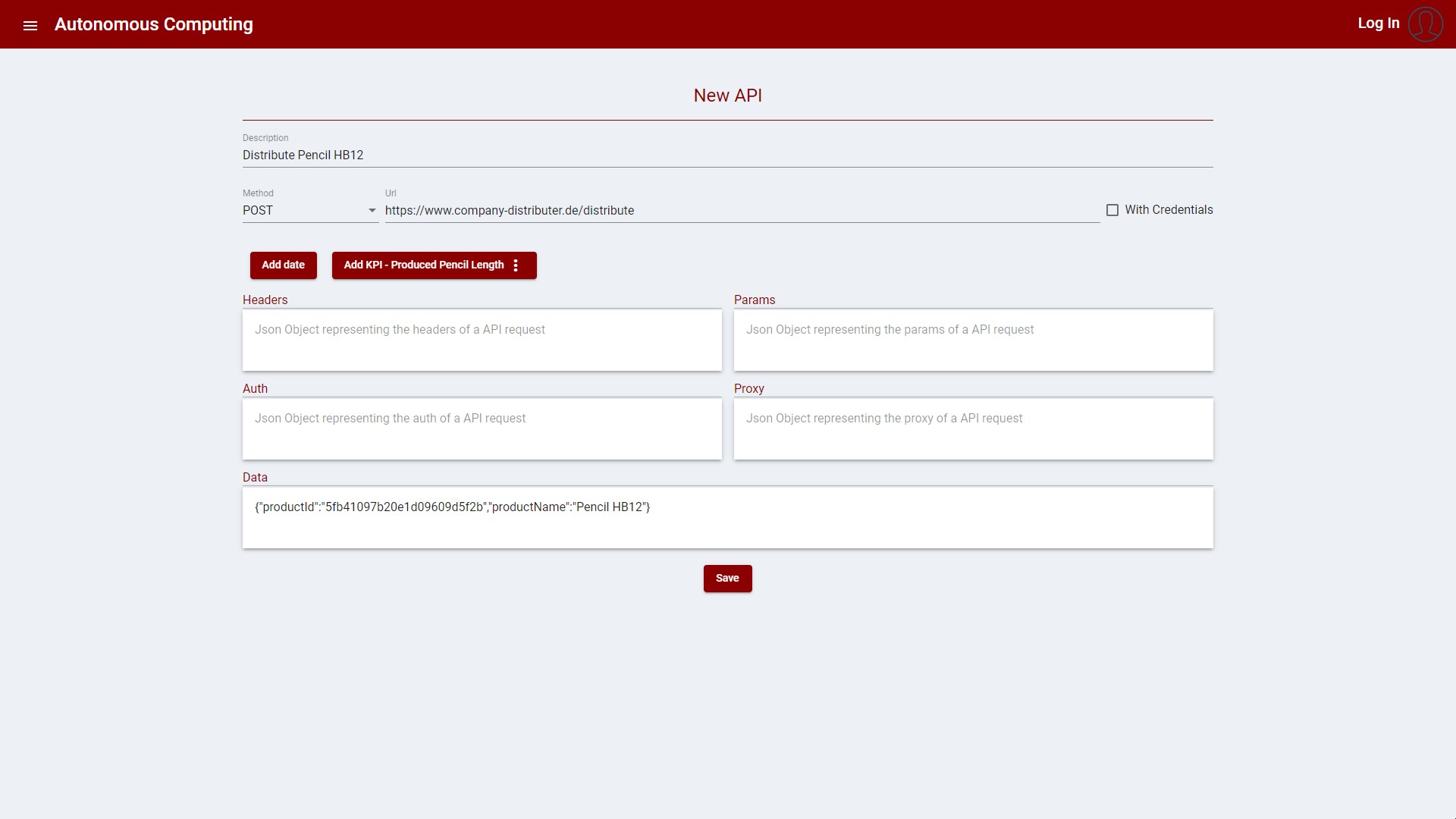 After creating an API Call, it is displayed in the list as depicted in the image bellow: 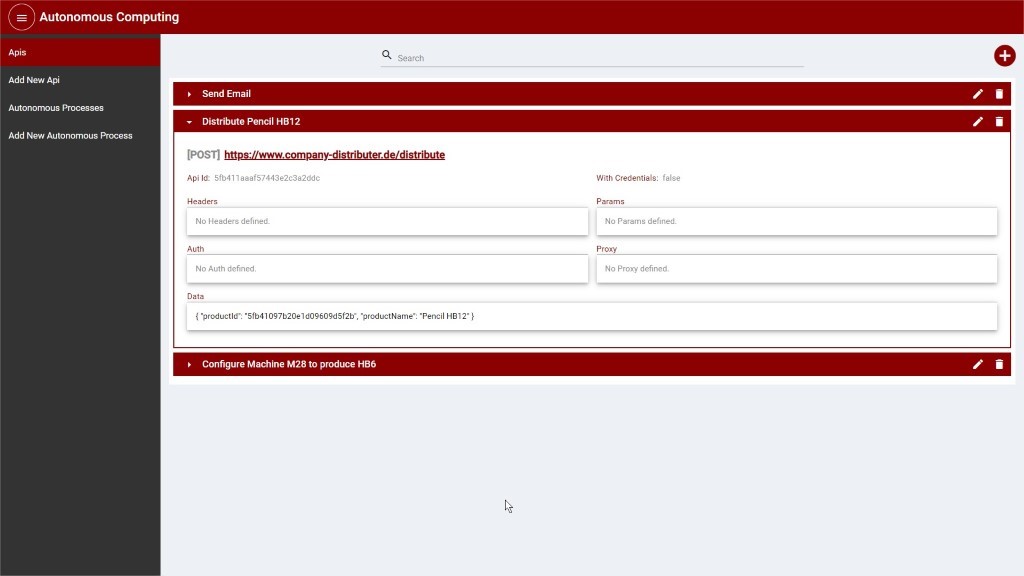 One or more conditions can be applied to KPI’s to ensure the quality of the products or help in automatically keeping values on track. The user can then select API calls to be executed when certain conditions are met. For example, an autonomous process can be created when a machine completes the target number of produced pencils. The autonomous process would then schedule the distribution of the pencils and the machine should be configured to start producing a different product.

To create an Autonomous Process, the following is necessary:

Follows is an example based on the ‘pencil’ scenario: 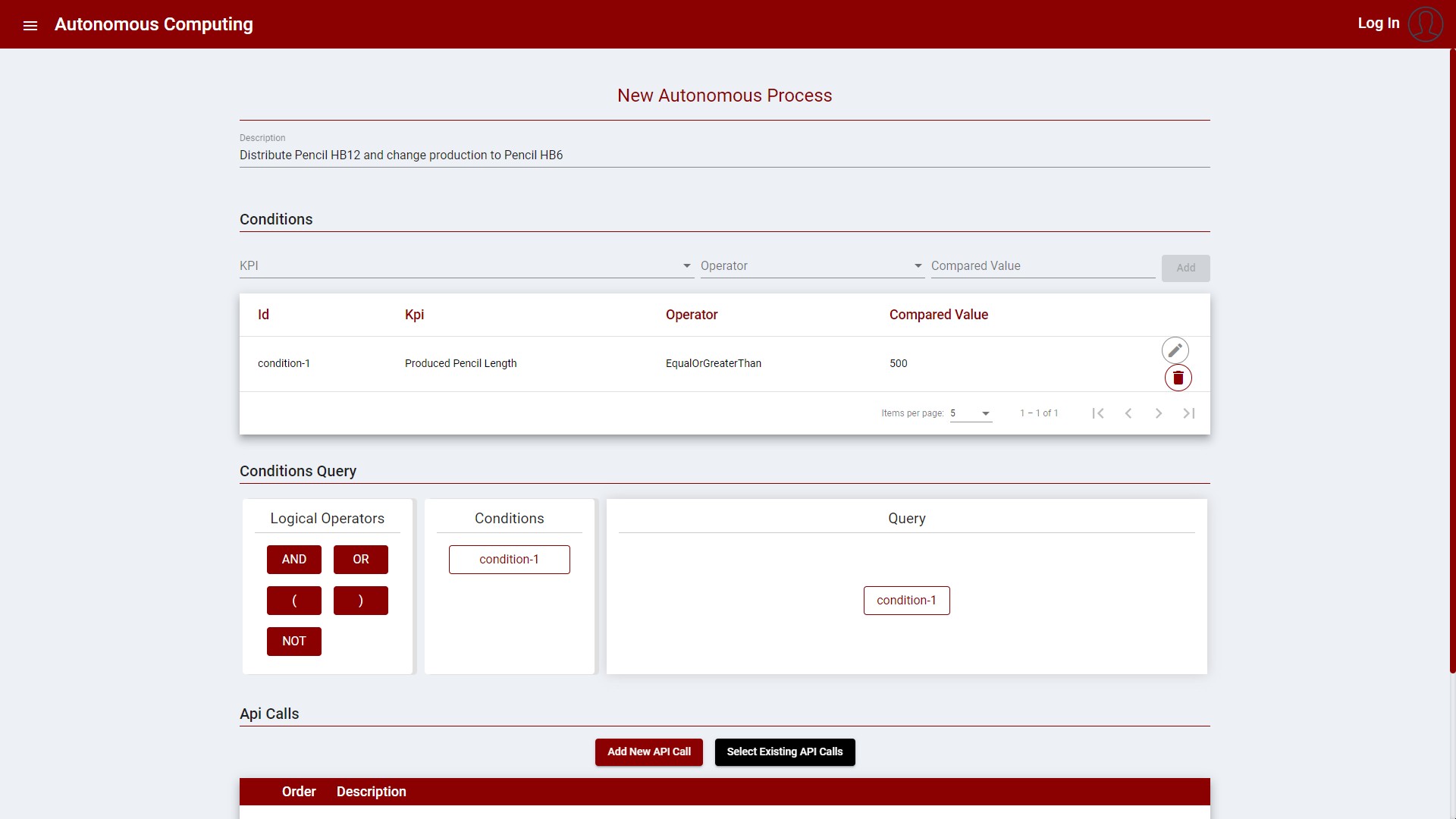 The Conditions query must be formulated using the conditions identifiers and the logical operators available in the drag and drop UI. 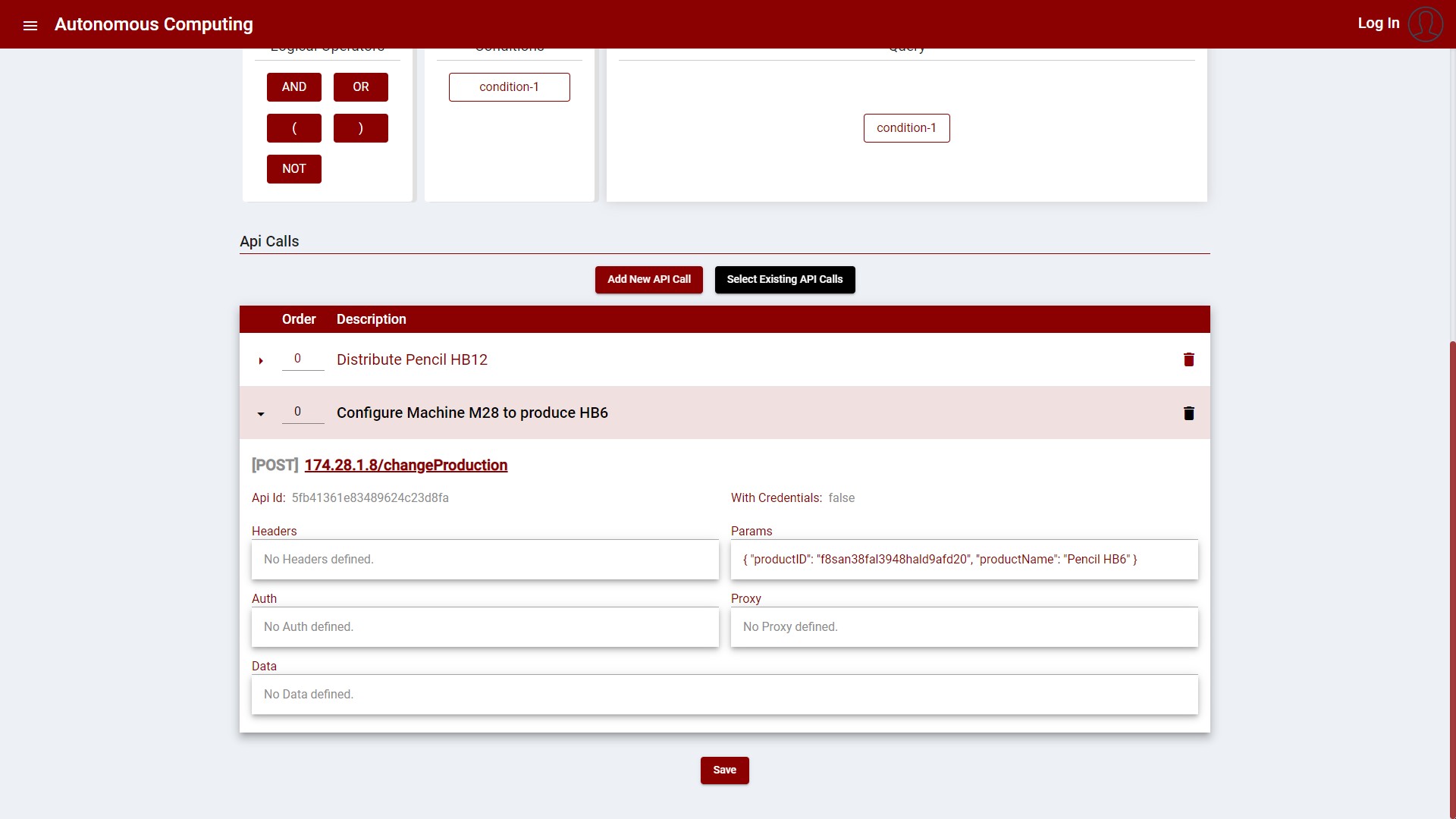 The API calls can be either selected or created when creating/updating the Autonomous Process.

The following images display the process: 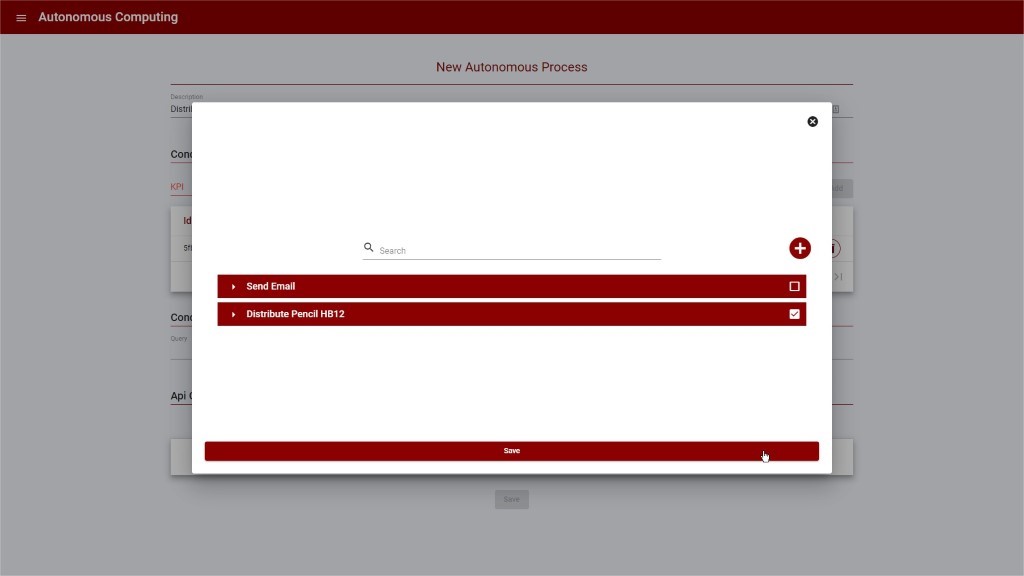 The API Call can include data from the KPI at the time the autonomous process is triggered as part of the API Call data. The buttons in the upper area are used to add these values, such as the KPI ID, value, or description: 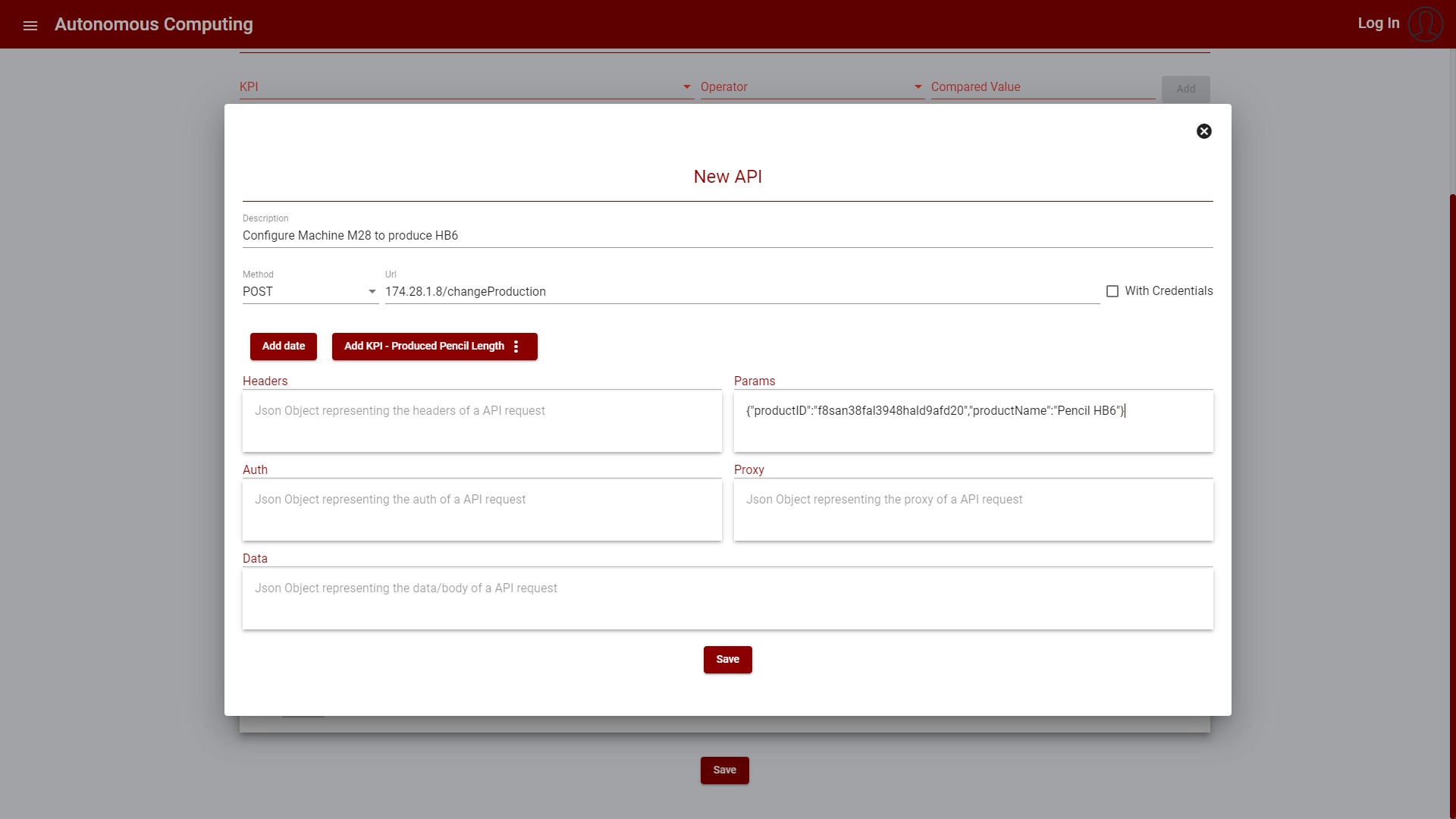 After creating an Autonomous Process, the item is displayed in the list as depicted in the following image: 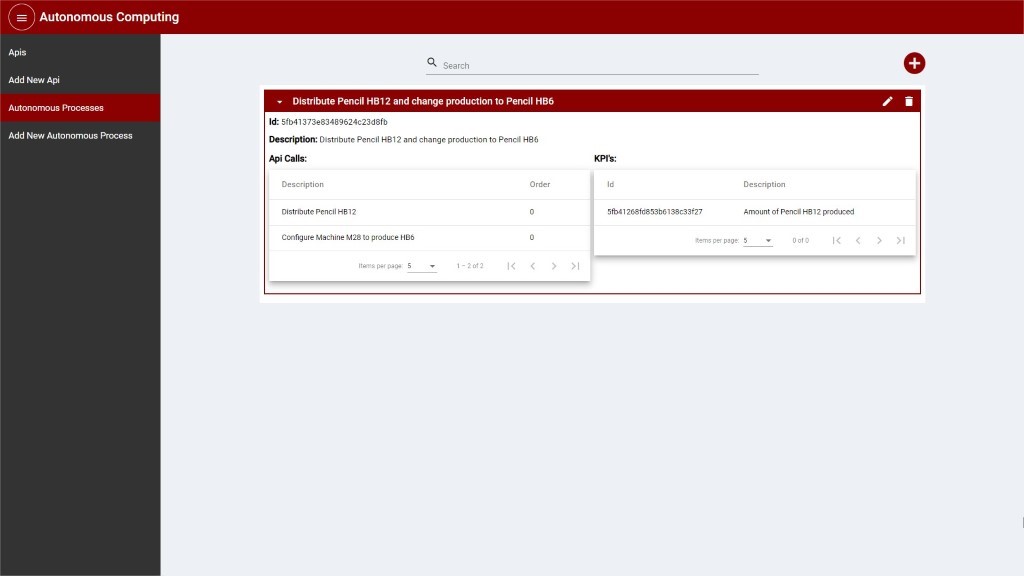 When the conditions are matched, the API Calls are executed, following the order specified.